“Llegó la mami, la reina, la dura, una Bugatti”. Just like us, you probably can´t get Chanel´s song out of your head. The talented singer, who now appears in all the headlines of the most famous European magazines, was chosen to represent Spain in the Eurovision Song Contest.

Coming back as an underdog, Spain has broken its streak of bad luck in this musical contest. It seemed like we would never return to the same successes we had in the past with singers like Massiel and his “La La La” or Karina and her “En un Mundo Nuevo”.

Every year, Spanish Eurofans turn their TVs to the contest´s streaming channel and open their Twitter just for fun, with no hope for a Spanish win. In fact, the memes generated by our latest candidates in Eurovision were usually the most fun thing that fans could find that day.

Spain has tried with all types of candidates, from cheesy love ballads such as the Amaia y Alfred´s song, all the way to the silliness of songs like “Chiqui Chiqui” from Rodolfo Chiquilicuatre. It seemed like Spain would never find its place in Eurovision´s Song Contest. This, our dear readers, has changed this year with Chanel Terrero.

This do-it-all woman is (as the fantastic group “Ojete Calor” says) a “mocatriz”: modelo, cantate, y actriz. In English, she´s a triple threat: a model, singer, and actress. She arrived at the Benidorm Fest with the hope of taking the world by storm, and it´s clear she´s been successful in her goals. No one can disagree that the cameras at Eurovision have never focused on Spain as much as this year.

As you know, the majority of our Spanish students are from outside of Europe, so they often aren´t familiar with this famous song contest. From AIL, as it couldn´t be any other way, we are always excited to teach them everything related to Spanish culture and Eurovision is without a doubt a large part of that. 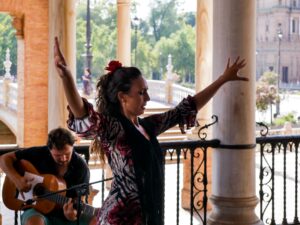 After showing our students some of the best performances at Eurovision, we let them choose one of the songs to do a lyrical analysis. This is a great option to learn Spanish and improve your vocabulary. If you´re interested in discovering more methods to study Spanish, check out our Instagram page! You can look at any of our posts and discover advice to make yourself a real pro at Spanish.

It was definitely interesting to remember some of the most iconic Eurovision songs with our students and see how each Singer represents a great success for their country. We can´t forget that this contest attracts fame from all over the world and is a great step into worldwide fame for many of the singers who participate and have the honor to represent their nation.

After finishing our class looking at the best hits from Eurovision, we watched this year´s candidates together and everyone said Chanel would definitely win. Her rhythm, her style, and catchy song were the perfect recipe for her to win it all. In fact, many people are still discussing that Ukraine won for political reasons and that the UK took 2nd place for its famous TikToker singer. Even so, one thing is still clear to us: Chanel is the best representative we could´ve had for Spain and she has set the bar very high!

What did you think of Chanel´s performance? If you still don’t know what we are talking about, you can find her song on YouTube. And remember our advice: listening to songs in Spanish is like taking classes in Spanish.