After a handful of weeks living and studying Spanish in Madrid, I’d like to believe that I am starting to settle in. Whether that be through eating my own bodyweight in Jamón or by ceasing to drink tea… well not entirely. But I digress… my conversations in Spanish are becoming more casual and mercifully, less intense – when I first arrived every attempt at conversation felt like I was being asked the million-dollar question in Slumdog Millionaire, now it bares a closer resemblance to the half-million question – still trying, but somewhat more manageable. I’m sure that my Spanish classes at AIL Madrid will keep on helping me make some progress.

That being said, there have arisen a number of behaviours that I have noticed to be ‘faux pas’ in Madrid. Naturally, having been raised by parents with a keen eye for good manners, I have not yet committed any of the below-listed blunders, but I have been witness to most of them from other ‘guiris’. So, without further ado, here is my short guide to good manners in Madrid.

I noticed this rather quickly. Being the only one of my friends to incessantly say thank you, good morning and goodbye to all bus drivers and shop owners, I quite like that it is such a must here.

What’s the quickest way to enrage a Spaniard? Failing to lick your plate clean after being served food. When you are served a meal by a native, it will be delicious and it will be devoured in its entirety.

Now, this is something I truly value about Spanish society. As an undiagnosed sufferer of Misophonia – also known as the ‘being generally irritable syndrome’ – I am a fan of this social norm. There is nothing worse than sitting next to somebody chewing with their mouth open; I assure you, I don’t want to hear the wet machinations of your mechanical digestion in action, and it would appear, neither do the Spanish.

Yes, I admit I am guilty of this most terrible of sins, as are many non-Spaniards. Just like bacon and eggs is not a Full English Breakfast, it is not a Paella unless done properly: a big traditional pan, sofrito, fish or chicken stock are essentials. 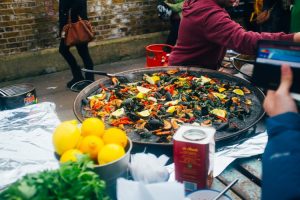 Since I’m studying Spanish in AIL Madrid, we have cultural activities in which we learn about Spain’s history, so I’ve learning a lot lately. The last 100 years of Spanish history have been tumultuous and violent, so much so that a now key part of Spanish society is ‘the pact of forgetting’, meaning Spaniards prefer to forget about the battles of the past rather than attempt to resolve them.

Parma ham is delicious. Iberian ham is delicious(er). They are not the same. The Spanish reserve a special place in their heart for their precious Jamón Ibérico de Bellota, as you will notice by the sheer number of Jamonerías on the streets, so try not to confuse it with its Italian counterpart – especially in front of a ‘cortador’. 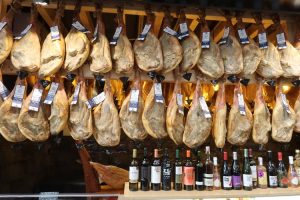 “But it looks so delicious and I love hot chocolate at home”. It might take your every ounce of mental fortitude to resist the urge, but just don’t do it, you will more than likely burn your tongue (trust me I learned this the hard way). Spanish dipping chocolate is not made for drinking, it’s very thick, closer to a pudding than a drink. Hence it goes well with churros – the Spanish answer to Krispy Kremes. I recommend you try the best churros in town at San Ginés.

The Spanish are wonderfully accommodating, and notoriously excellent hosts. So they really appreciate it if you speak to them in Spanish – of course, assuming you can. If not, there are plenty of places in which to take a few Spanish lessons like the ones I’m taking in AIL Madrid.

Of course, the best way to fit in when travelling to another country is to learn the language. I’ve been taking Spanish classes at AIL Madrid and they have really helped me in my everyday encounters, whether that be in shops or general conversation. Together with the language, knowing social norms is important if you want to truly fit in in Spain, or any other country for that matter. These pieces of advice that I have shared with you have helped me to integrate into my new life in Madrid and combat the beginnings of both homesickness and culture shock.

Do you have any other advice for those interested in studying Spanish in Madrid? Let me know in the comments!

My name is Tom and I am from a small and quiet city in England: Cambridge. I have some Spanish friends and I have always wanted to speak Spanish with them. My friends used to tell me that the best way to learn a language is to live in the country and immerse yourself completely in the culture. Therefore, a couple of months ago I moved to Madrid and I am currenty living in a flat in Sol, really close to the Royal Palace and the Plaza Mayor. I am improving my Spanish every day with the help of AIL Madrid and I have met some friends from my classes with whom I love to go for a drink or two and some tapas. So, I want to share my experiences and my stories with you through this blog. I hope you enjoy reading it as much as I love living in this beautiful city!