If  you’re currently studying Spanish, I’m sure of one thing: You’ll want to learn Spanish in as short a time as possible. Here, I’m going to share with you some top tips for learning Spanish fast!

Speaking Skill TIP: Talk in Spanish all the time!

The first, and arguably most important of my top tips for learning Spanish fast is to be brave and learn from making mistakes! When you’re learning a new language, it’s absolutely vital that you’re willing to throw yourself into it! At the start of the course, you might feel like a diver standing on the highest board,  a bit shaky of jumping into the water beneath; but this an analogy for precisely what you must do. Dive in! You’re human, you’ll make mistakes on your journey to learn Spanish, absolutely everyone does. But the more you practice, the fewer mistakes you will make and the faster your learning will become. So, if there’s just one thing to take away above all else, it’s to take the plunge, and don’t be afraid of making mistakes!

The second of my top tips for learning Spanish fast is to listen. All of the classes are taught in Spanish as this is the proven method of helping to promote your listening skills. Learning a new language isn’t all about perfecting grammar and vocabulary. Like all languages, Spanish is a language to be spoken, heard and understood, and these principles are at the core of our teaching practice. And listening doesn’t need to be confined to the classroom. Download Spanish audiobooks and podcasts. Watch Spanish TV and Spanish movies. The more Spanish you listen to, the greater your understanding will become, and the more confident you will be when you’re speaking Spanish in the real world. 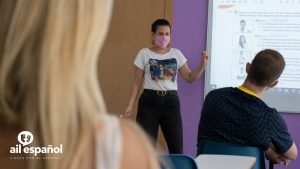 Spanish Grammar Skill TIP: No worries at all!

The third of my top tips for learning Spanish fast is to never obsess about grammar. Naturally, you’ll be learning the fundamentals of the Spanish language, as a basic grasp of the structure of the Spanish language underpins all spoken and written Spanish. However, the primary objective is to enable students to be able to communicate confidently, competently and hopefully fluently in Spanish.

My next top tip for learning Spanish fast is a really simple one, and something that’s been explored in depth in an earlier article: Reading! Books, magazines, websites, newspapers, literally anything that takes your fancy. And please don’t waste your time checking the dictionary every single time you come across a word with which you’re not familiar. Doing so is counterproductive, unhelpful, and will reduce the enjoyment you gain from reading in Spanish. As long as you get the general gist of what you’re reading, that’s just fine and will serve you well.

Think and talk in Spanish 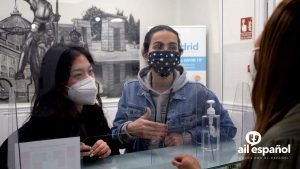 Another top tip for learning Spanish fast is to speak slowly and clearly. Don’t be in a rush. If you’re talking to someone in Spanish and they’re speaking too fast for you to follow, ask them to slow down! And under no circumstances translate what you hear back into your own language before re-translating it back into Spanish. Think in Spanish, speak in Spanish, listen in Spanish.

Having fun is the TOP TIP

Another of my top tips for learning Spanish fast is make sure to have fun both in school and when you’re out and about. At AIL Madrid, learning is fun! You won’t be sitting in some dreary lesson, bored to tears, staring out of the window and waiting the lesson to end. The school has a highly professional group of teachers who have been trained to ensure that the learning process is both educational and enjoyable. You can’t have one without the other! It simply doesn’t work. And in your free time away from the school, I’d encourage you to get out and explore Madrid as much as you can. There’s so much to see and do. Spend time with the locals, practice your Spanish wherever and whenever you can. In no time at all, you’ll be speaking fluent Spanish and you won’t even know how you did it! 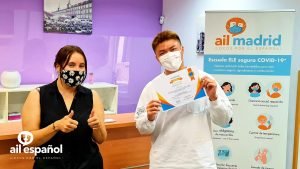 I’d also strongly urge you to keep a journal, written in Spanish, of the time you spend in Madrid. Keeping a written journal of your day is a really useful way of committing the Spanish you’ve learned to memory. It’ll help you expand your vocabulary and give you a treasured memory to revisit in years to come.

Spanish is not a difficult language to learn, despite what you may have heard to the contrary. There are enormous advantages to be gained by being able to converse in the second most spoken language in the world. If you apply the simple, common sense suggestions I’ve made here, you’ll not only make your learning easier, you’ll learn Spanish fast too.